The Best Beaches for Gay Parties and LGBT Travelers

All beaches in Mykonos are gay-friendly, and for many years the gay sun worshipers have flocked to Paradise and Super Paradise, before moving to Elia, which is now THE gay beach on the island. Neighboring Agrari gets those who can’t find a sunbed available or a spot to spread their towel at Elia, and Panormos is also popular with gay couples. At Paraga, just up the hill from now mostly-straight party beach Paradise, you’ll also see a small number of gay nude sunbathers. In between these are secluded coves, for those who prefer privacy away from the crowds. Here’s your guide to Mykonos’ most gay-friendly beaches: 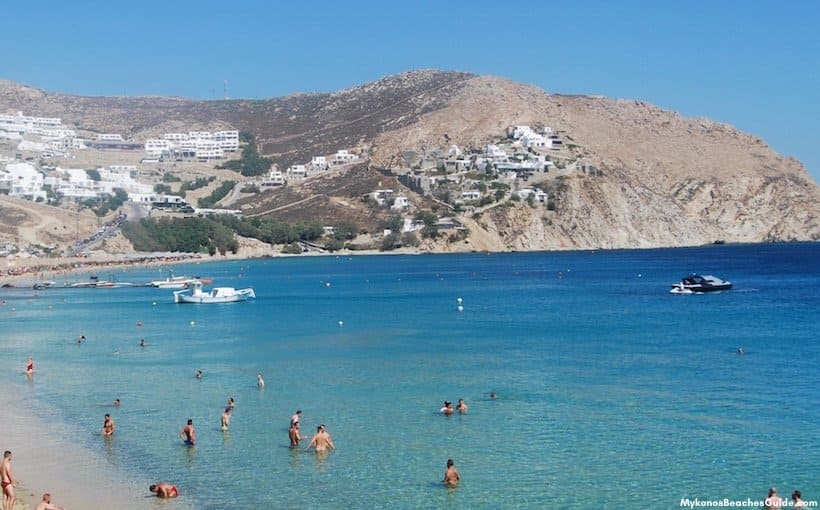 When you arrive at Elia, you don’t immediately get the sense that you’re at a mostly-gay beach. That’s because you first see it covered in sunbeds and umbrellas, usually taken over by straight and gay couples, and only when you start walking to the right do you find the gay and nude. In July and August, when many can’t find space for their towel, the rocks are an alternative to the sand. Continue going over the rocks, and you arrive at Agrari Beach (see below).

How to Get to Elia Beach
There’s a rather infrequent bus (usually departing every 2 hours, depending on the season) from the Old Port terminal to Elia. If you go by car from Mykonos Town, it takes about 25 minutes, and you may park behind the beach. 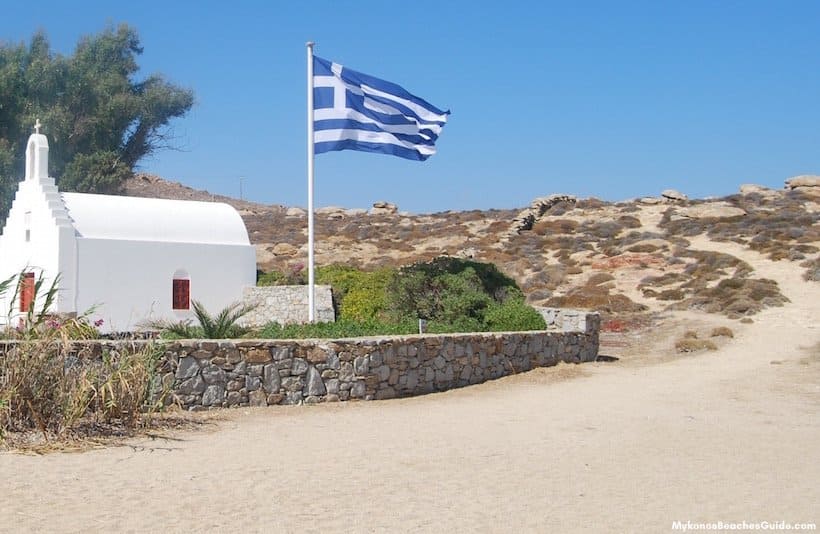 This beach is now a quieter alternative to Elia. It’s found right over the rocks, and is a popular cruising site (not-so-discreetly on the rocks). The reason to head in its direction, however, is the more peaceful and uncrowded atmosphere, with the same crystal-clear waters.

How to Get to Agrari Beach
Agrari is 25 minutes by car from Mykonos Town, partly through an unpaved road. Alternatively, you can take the bus to Elia (which usually departs every 2 hours from the Old Port terminal) and then go over the rocks to Agrari.

Where to Stay in Agrari Beach
- Sunrise Hotel and Suites - Budget hotel right on the beach.
- Ethereal Apartments - Traditional Cycladic-style studios just a few steps from the beach. 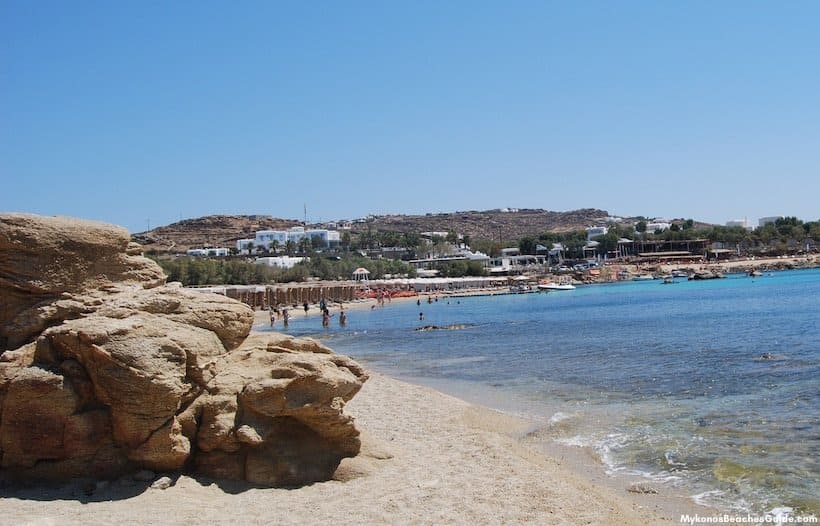 It’s a small beach but it attracts all kinds of people, from the young crowds that get tired of neighboring Paradise Beach, to naturists. The popularity of its beach club has driven most naturists to other beaches, but you occasionally still find straight and gay couples sunbathing nude on the right side (when facing the sea).

How to Get to Paraga Beach
Paraga is one of the beaches with the most frequent bus services from Mykonos Town, just 15 minutes away. If you go by car, there’s very limited parking. Alternatively, drive to Paradise Beach, which has more parking space, and then walk up the hill to Paraga.

Where to Stay in Paraga Beach
- Soho Roc House Mykonos - Romantic design hotel in a scenic location above the sea.
- Zephyros - Budget hotel right above the beach. 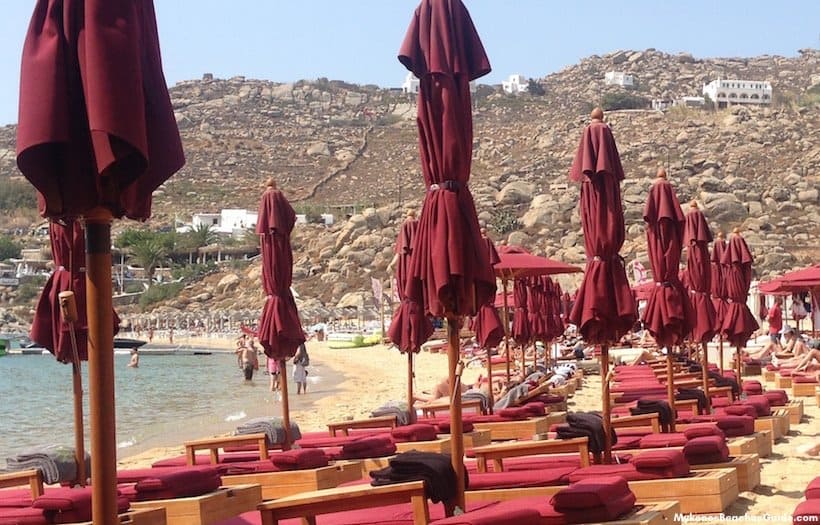 It’s no longer the most popular beach for the gays, but its parties do still attract the gay party boys. The fun picks up late in the afternoon, with the gayest side being the far right, close to the beach club with pool.

How to Get to Super Paradise Beach
You can get to Super Paradise in just 15 minutes by car from Mykonos Town. There’s a parking lot behind the beach (just make sure you arrive early to guarantee a spot). The public buses don’t go to this beach, but there’s a shuttle connected to the beach club, which departs from the Fabrika bus terminal every two hours.

Where to Stay in Super Paradise Beach
- Lyo Boutique Hotel - Romantic and stylish hotel with a beautiful sea view.
- My Aktis Hotel - Breathtaking views over the beach from the suites and villas and the infinity pool.
- Super Paradise Suites - Highly-rated hotel overlooking the entire beach and with a trendy restaurant. 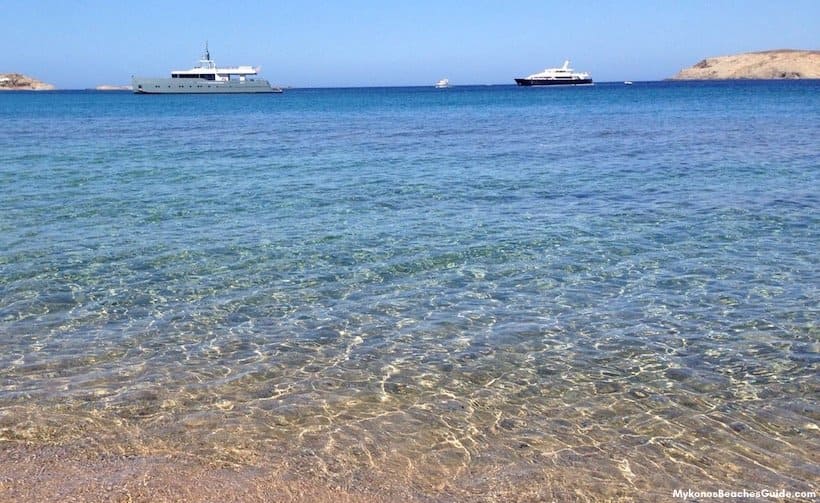 On the northern side of the island, away from the most popular beaches, is Panormos, which was once a secret, but has been discovered. It has grown in popularity since the opening of a beach club. Luckily, most people tend to stay by the club, on the left side, so the further you walk to the right, the more deserted it gets. Here you’ll find people sunbathing nude, and many of them are gay men.

How to Get to Panormos Beach
Panormos is 15 minutes by car from Mykonos Town. There’s a large parking lot behind the beach. The bus service depends on demand, so it varies every year and throughout the year. There are years with no service at all. In other years, there are about a handful of departures per day from the Old Port terminal.

Where to Stay in Panormos Beach
- Panormos Village - Studios and apartments with a panoramic view of the beach.
- The Etesian Hotel - Contemporary suites above the beach.
- Albatros Club Mykonos - Good-value hotel with a scenic view of the entire beach. 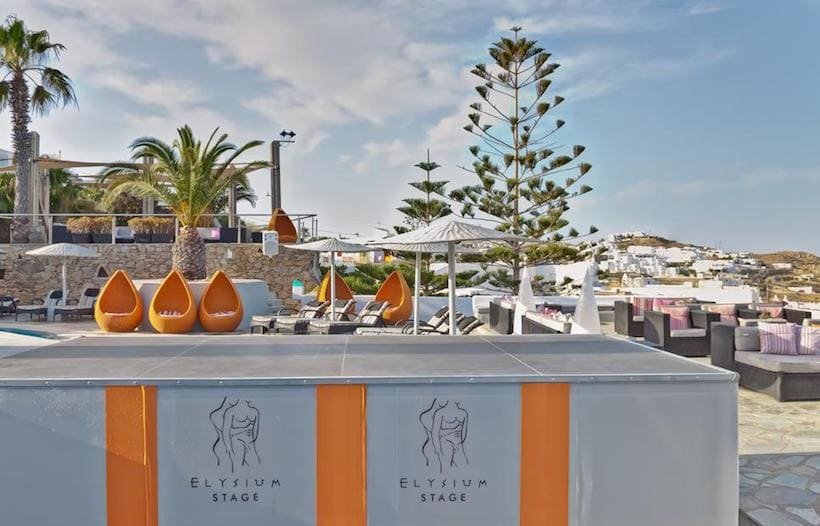 The beach hotels listed above are used to welcoming all kinds of guests, including the many gay travelers who visit Mykonos every year. However, if you feel more comfortable staying at gay-friendly hotels and apartments in order to be surrounded by “like-minded” guests, there are other options all over the island, including an almost exclusively gay hotel in Mykonos Town. Take a look here: